A Way of Life – Bristol Premiere 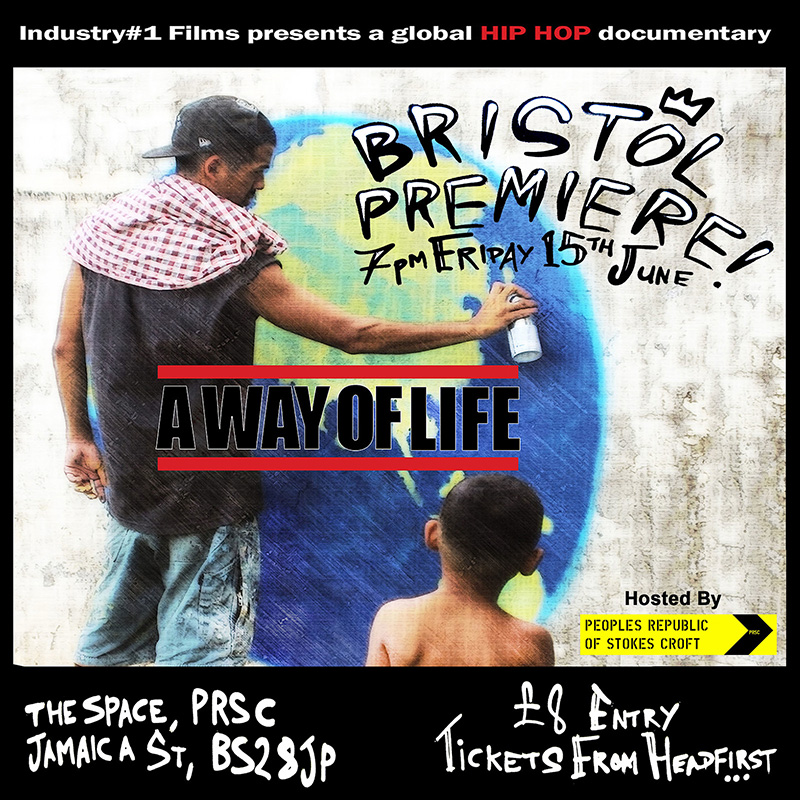 “Hip hop is a basic attitude against oppression, the attitude that my voice isn’t being heard, and I’m going make my voice heard no matter what, that goes across all races of people, all cultures” – KRS-One (USA)

With a DJ dropping beats, b-boys and b-girls cutting shapes, and paint spattered graff writers drawing on the walls, this night will be a joyous Bristol flavoured celebration of all things Hip Hop.

‘A Way Of Life’ gives prominence to a culture that has gone beyond music, providing an accessible platform of expression for millions of people across the globe.

Shot over a span of two years in 15 locations worldwide ‘A Way Of Life’ explores Hip-Hop culture from music to graffiti, beat boxing and break-dancing.

The film charts Hip-Hop’s progression through it’s near 40 year existence from an underground subculture of New York “Bronx”,

Highlights include Brazilian artist Emicida being arrested for performing his social, political song HipHop; the Ghanaian Hip Life scene; and Hip Hop being used to teach English and life skills in Cambodia.

Interviews include up and coming as well as established artists such as KRS One (USA), Skinnyman (UK), Jeru The Damaja (USA), Marcelo D2 (Brazil), Lord Finesse (USA) & Big Narstie (UK) illustrating their talent, background & the socio-cultural environments that influence their music.

“A Way Of Life is a life-affirming look at the origins & universality of hip-hop culture. The editing style & interview settings match the boot-strap nature of hip-hop itself. It is an education for the new arrivals to the scene & a heart-warming re-acquaintance for the long-time aficionados. It captures the love.” Whizz – London

“Definitely needs to be seen” Mys Diggi aka Mystro

into a worldwide consciousnesses” XXL Magazine

Industry #1 is an independent production company that uses film, music and art to entertain, inspire and educate it’s audience. Began in 2006 as an online platform to launch and promote artists from around the globe. The website showcased global Hip-Hop talent, featuring interviews & live reviews, before expanding to curate their own films and events. In 2013 Industry Number1 put together a number of global Hip Hop festivals in London and Geneva, Switzerland. The project took its present guise in 2012 as filming began for ‘A Way Of Life’ Global Hip Hop documentary.

Shibe Alawiye has been working in film production and broadcast for almost a decade, beginning his career as runner at Crow TV. He then went on to created his own production company Camerashai providing filming and editing services for films, documentaries and promos. Shibe was an editor for the BBC at Bestival and won Best Newcomer Award in 2006 at the Portobello Film Festival for his short film Our Fate, which led him on to creating, editing and producing the feature length documentary “Makers Our Story” released in both the US and UK.

Andre’s background is predominantly marketing, promotion and analytics. His journey started with a BA in Computer Science achieved at the Polytechnical University College in Stavanger. He then developed web based marketing and e- commerce solutions for various companies focusing with sales and analytics. In the last couple of years Andre has been setting up the Industry #1 site whilst filming at various events and festivals that have contributed to ‘A Way Of Life’ Global Hip-Hop documentary.